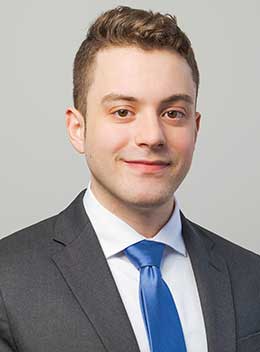 Mark graduated from Temple University’s School of Law with a certificate for advanced course work in Trial Advocacy and Litigation and as a Rubin Public Interest Honor’s Society Fellow, an honor awarded to students who show outstanding commitment to public service.

After his first year of legal practice, Mark was recognized as a Super Lawyers Rising Star, an honor awarded to no more than 2.5 % of lawyers in the state.

Before practicing, Mark graduated from Temple University Beasley School of Law, where he received multiple awards for his achievements in trial advocacy. Mark received several awards for outstanding oral advocacy and was recognized for distinguished performance in Civil Trial Advocacy. Mark also participated in Temple’s nationally ranked Trial Advocacy Program, and later served as a teaching assistant for the program. At graduation, Mark received a certificate in trial advocacy and litigation, in recognition of his focus on advanced trial advocacy coursework.

Mark has long been dedicated to advocating for victims’ rights.

Mark graduated from law school as a Rubin Public Interest Honor’s Society Fellow, an honor awarded to students who show outstanding commitment to public service. In law school, Mark also interned for a Federal Judge in the Eastern District of Pennsylvania where he gained valuable experience in legal research and writing. Mark then served as a research assistant at Temple University’s Institute on Disabilities, where he studied the rights owed to disabled people and advocated for progressive changes in Philadelphia. Mark also served as a research assistant for a law professor while investigating the Environmental Protection Agency’s rule-making processes.

Mark then became a certified legal intern for the Defender Association of Philadelphia where he advocated for children committed to the Department of Human Service’s custody. Mark also assisted the Philadelphia District Attorney’s Charging Unit where he collaborated with Assistant District Attorneys in filing formal charges against criminal Defendants. While he studied for classes and held internships, Mark also clerked part-time for a Center City Philadelphia Plaintiff’s firm.

At the University of Scranton, Mark studied philosophy and specialized in logic, rhetoric, and ethical theory. Mark also graduated in multiple honors programs and was recognized as a “Who’s Who” among college students, an achievement awarded for leadership ability displayed in the areas of scholastic aptitude, community service, and extracurricular activities. Mark was also a varsity athlete on Scranton’s crew team.

In his spare time, Mark enjoys guitar, boxing, and chess.

Mark is licensed in both Pennsylvania and New Jersey.