The Philadelphia attorneys at McLaughlin & Lauricella fight tooth and nail—in the courtroom and elsewhere — to gain justice for injured and violated clients. 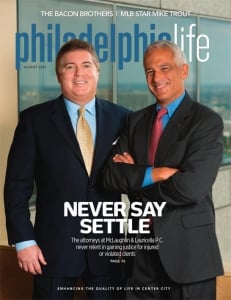 It would be fair to characterize Slade H. McLaughlin and Paul A. Lauricella as averse to delegating. This is why it’s not uncommon to see one or both attorneys poring through medical records or case files when most people on the East Coast have been asleep for hours.

Such commitment has reaped tremendous dividends, however, in the form of million-and-multimillion-dollar verdicts for clients who have been injured in catastrophic and often irreparable ways—a woman who suffered blindness due to medical negligence during a routine knee operation, for example, or a man who lost his legs in a bulldozer accident and had to call 911 himself because his coworkers left the scene—and in some cases even been killed. “In one case—Fledderman v. Glunk—we represented an 18year old Penn State student who was having liposuction performed by a doctor,” recalls McLaughlin, who earned his Juris Doctor from Villanova University School of Law. “We contended that the doctor hit a blood vessel in the patient’s neck, and instead of calling 911, because he was concerned about an ambulance pulling up in front of his office, he kept her there for hours. By the time someone did call 911, only because of the insistence of the patient’s mother, it was too late, and the patient later died in the hospital from complications of a fat embolism. We won a $20.5 million verdict, including $15 million in punitive damages, which is the highest punitive damage verdict in a medical malpractice case ever awarded in Pennsylvania.”
McLaughlin and Lauricella, partners in the Philadelphia based firm, McLaughlin & Lauricella P.C., have successfully represented plaintiffs in some of the biggest, most high profile cases in Pennsylvania and New Jersey, including those involving sexual abuse victims of Jerry Sandusky, former Philadelphia Daily News columnist Bill Conlin, and the Archdiocese of Philadelphia. McLaughlin and Lauricella owe their success on behalf of their clients, at least in part, to the late Jim Beasley Sr., a legendary trial attorney under whom they both trained for more than a decade. 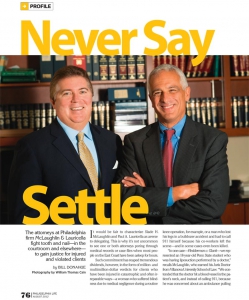 “Jim Beasley Sr. was an icon, and I credit him with a lot of the successes I have achieved,” says McLaughlin, a board certified trial attorney. “From the time a case comes into the office, you work it up like it’s going to trial. If you do everything you need to do, and spend the money for the best experts, which can be very costly, that approach can be the difference between a verdict of $200,000 and one of $2 million.

“I was a defense lawyer for the first 10 years of my career,” he continues, “and when you’re on that side of the fence, you get to know who the real plaintiff lawyers are — the ones who know how to handle a case and how to prepare it correctly for trial. Many lawyers fear the courtroom, but that’s where the pedal hits the metal.Only one side walks out victorious after a jury verdict. Many lawyers don’t want to expose themselves to that kind of litmus test in court, so they settle for what’s offered. Paul and I take a very different approach to our cases.”

Justice for Injured Clients – McLaughlin & Lauricella’s commitment to fighting for clients’ rights in the courtroom has led the firm to trademark the phrase, “Never Settle for a Lawyer Who Only Knows How to Settle.”

“There are lawyers who try cases and those who settle cases; the lawyers who settle cases often talk about their ‘results’ but not their verdicts,” says Lauricella. “The only way to get the maximum result is to be prepared to make the maximum effort on behalf of the client in the courtroom. A lawyer who thinks he will settle a case and not prepare it for trial is doing a grave disservice to the client. Our approach, in a way, is similar to hoping for the best but always preparing for the worst.”

McLaughlin & Lauricella’s commitment to fighting for clients’ rights in the courtroom has led the firm to trademark the phrase, “Never Settle for a Lawyer Who Only Knows How to Settle.”

Cases are often won and lost in the pretrial stages, according to McLaughlin. Realizing this, he and Lauricella use their complementary skills to work in tandem on depositions, during which both attorneys employ all available technology—Internet enabled computers, printers, scanners, etc. — to fact check statements made by opposing witnesses, often debunking their claims.

“We’ve tried hundreds of cases, so we know what to look for and we know what’s important,” says McLaughlin. “We’re fungible in that we’re both good lawyers, and clients really get their money’s worth.We try cases together, too, wherePaul will do the opening and I’ll do the closing.”

The team approach is one of the most unique aspects of the firm, according to Lauricella, who, like McLaughlin, earned his Juris Doctor from Villanova University School of Law.

“Firms may have a single attorney working on a file or single attorney with junior associates, whereas Slade and I work together as two senior attorneys working side by side,” he says. “Slade and I have skills and talents that complement each other nicely; he’s a very hands on, nuts and bolts fellow who is well versed in law and able to handle multiple aspects of a case at once, while I tend to dig deeply into the details and minutiae of the various records and evidence. As a result, clients end up getting the best of two different worlds.

“Most lawyers 30 years out of legal school are not going through medical records, but by doing so I’ll see things that other lawyers miss, like altered medical records, which are a great find in a malpractice case,” he continues. “For one case that we were preparing to try earlier this year, I remember reading medical records at 2 in the morning. There’s no substitute for reading your files and doing the legwork. That kind of attention to detail is often the difference between settling a case and getting a verdict that the client truly deserves.”

Although both partners commit tremendous amounts of time and energy to their clients cases, they also stay extremely busy in other parts of their lives. “I’m up at 4:45 a.m. every morning, and I’m here every Saturday and Sunday, but I don’t miss any of my kids’ athletic matches or parent teacher conferences, and I talk to my wife five or six times a day on the phone,” says McLaughlin, a member of the Mensa Society who has also climbed to base camp at Mount Everest and participated in the Running of the Bulls in Pamplona, Spain. “It’s a big responsibility. In some cases we’ve represented families of brain injured children where mistakes were made in their medical treatment, and now those babies need care for perhaps 60 or 70 years. Those families are depending on us, and we get great satisfaction in achieving stellar results for clients in those situations.”

“We’re not just lawyers,” adds Lauricella, whose interests beyond the courtroom include rock ‘n’ roll (his favorites are the Pixies and Ramones), distance running, and writing comedy sketches for Michael Smerconish’s radio program. “I’ve known Slade for 30 plus years, and we’re good friends. I don’t know if you would characterize it as a great accomplishment, but we try to be emotive, thinking human beings who truly connect with our clients. I’ve also got a child with special needs so I’m cognizant of the impact that having a disabled child can have on a family.

“The temptation is to take things personally when you’re involved in a case,” he continues. “If you’re working on a case that involves a catastrophically injured young girl, where her life is devastated, you can’t help but get emotionally connected. But as an attorney you need to channel that emotion into appropriate efforts on behalf of the client. The most rewarding part of my job occurs when I get a change of address card from a client [after a verdict]. When that happens, it’s a tangible indication that we have done something significant for them.”