The full story about what happened in the Penn State child-sex abuse scandal will only come out through the civil lawsuits that now appear inevitable, and the matter raises novel and challenging legal issues, according to lawyers with experience in similar litigation.

STATE COLLEGE, Pa. — Lawyers for people who say former defensive coordinator Jerry Sandusky victimized them have been surfacing and speaking out in recent days, raising the likelihood the criminal charges currently pending against him will eventually be followed by civil lawsuits.

Sandusky is accused of abusing eight boys, some on campus, over 15 years, allegations that were not immediately brought to the attention of authorities even though high-level people at Penn State apparently knew about them. 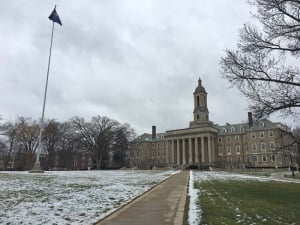 The scandal resulted in the ousting of school President Graham Spanier and longtime coach Joe Paterno, and has brought shame to one of college football’s legendary programs.

Athletic Director Tim Curley was placed on administrative leave, and Vice President Gary Schultz, who was in charge of the university’s police department, stepped down.

Schultz and Curley are charged with lying to the grand jury and failure to report to police, and Sandusky is charged with child sex abuse. All maintain their innocence.

One of the first tasks will be to winnow out any claimants who may seize upon the scandal in hopes of financial gain.

“It does happen that people who come out of the woodwork do not have a real case,” said Gerald J. Williams, a Philadelphia lawyer who has handled civil rights cases involving child abuse. “But by the same token, in this kind of case, there are often a lot of people who have just been quiet about their encounters with the defendant.”

Reed Smith, a Pittsburgh-based law firm with more than 1,700 attorneys, said Thursday it had been retained by the board of trustees, although a Penn State spokesman downplayed the threat of civil exposure.

“Nobody here is spending any time thinking about that or talking about that,” said university relations vice president Bill Mahon.

Legal experts said Sandusky, the school and other likely defendants would all face different levels and types of possible legal problems in civil court. That would hinge on the evidence produced by the discovery process, which in civil litigation generates much more information than in a criminal trial, where defendants have a broader right against self-incrimination.

“You’re going to see everybody pointing at somebody else to try and get themselves out of it,” said Slade McLaughlin, a Philadelphia lawyer who has pursued claims in the Philadelphia Catholic priest abuse case. “When you’ve got 19, 20 kids coming out, saying ‘He did it, he did it,’ I don’t understand why anyone at Penn State in their right mind would say, ‘Let’s fight this.'”

McLaughlin said he based those numbers on direct conversations with lawyers who have already lined up clients, as well as with investigators for those lawyers who are currently combing for potential evidence to use when lawsuits are ready to be filed. He does not currently represent any accusers, but expects to become involved in the near future.

“I’ve heard there are people out there going to the rallies, scouting around, talking to people who went to The Second Mile gatherings,” McLaughlin said. The Second Mile is a charity Sandusky founded for at-risk children where, according the attorney general’s office, he met the eight boys he is accused of sexually abusing.

Lynne Abraham, the former Philadelphia district attorney who has been hired by The Second Mile, said the charity might be destroyed by the scandal.

“If we can reconstitute ourselves … will the public and donors have faith in us?” she said. “The need doesn’t go away if an organization closes. The need just goes someplace else.”

Harrisburg lawyer Ben Andreozzi, whose firm specializes in sexual abuse litigation, represents at least one male client who accuses Sandusky of severe sexual assault. He told the Legal Intelligencer he and another lawyer are in “active communication” with other potential clients.

State police said one adult has contacted them.

Justine Andronici, a lawyer with the Centre County Women’s Resource Center in Bellefonte, on Thursday confirmed a story in The Harrisburg Patriot-News that she and attorney Andy Shubin were working to help people who have come forward to accuse Sandusky in the wake of a Monday night television interview during which he denied criminal wrongdoing.

At least three other Pennsylvania lawyers have told the AP in recent days that they have been in contact with purported victims or their representatives about potential lawsuits.

“I’ve been doing this for 24 years, and I’ve never seen this activity,” said Altoona lawyer Richard M. Serbin, who has pursued well over 150 claims against Catholic and non-Catholic religious institutions, and others, across the state. “Some of the people I’ve seen on TV that are supposedly handling these cases, I’ve never even heard of.”

The myriad of legal issues raised in the scandal includes whether Penn State, a “state-related” university that is getting more than $272 million from state government this year, will be able to assert government status that might limit liability.

“They are not entitled to sovereign immunity,” said Matthew Casey, a Philadelphia lawyer who has handled catastrophic injury cases. “It doesn’t mean that they won’t attempt to invoke sovereign immunity, but the appellate case law is pretty clear on that.”

The response by Penn State officials to reports of abuse will probably form a key part of any legal battle, as well as the circumstances surrounding Sandusky’s abrupt retirement in 1999 at the height of his coaching career.

Another complicating factor is the statute of limitations in these kinds of cases for juvenile victims. Until August 2002 the clock ran out at age 20, but that year the Legislature raised the limit to 30. Prosecutors accused Sandusky of crimes from 1994 to 2009, and it’s unclear whether civil allegations will date back further.

Serbin said Pennsylvania’s law remains one of the weakest in the country, from the standpoint of child abuse victims. When it was changed nine years ago, the new provisions were not made retroactive, and courts tend to enforce the time limits strictly.

“So some of these cases may already be stale, and my hunch is, some of them are,” Serbin said.

Several experts predicted any civil cases will wind up in Centre County Common Pleas Court — not federal court — and that judges will be sympathetic to having the cases captioned anonymously, if that is what the accusers want.

Some lawyers suggested Penn State, a large institution that can afford a vigorous legal defense, should consider reaching out to victims in an effort to avoid lawsuits.

“New facts are going to come out, I’m sure, in the civil litigation,” Casey said. “It’s one of the reasons that Penn State and the other potential defendants may decide to do whatever they can to prevent that from happening, and people going under oath. It’s very dangerous.”

Mahon said that has not been a subject of discussion.

“We don’t have the identities of victims, other than maybe some of them going to the press,” he said.

Lawyers had different theories regarding whether to file a lawsuit immediately, or after criminal charges have been resolved. Some say delays never helps plaintiffs, but others believe details that emerge from the criminal cases will strengthen their hand. Publicity now, of course may also generate additional clients.

So many facts remain unknown that it is difficult to say how much a legitimate claim of sexual abuse against a child might be worth in the eyes of a jury, and the grand jury report showed a vast range of alleged actions by Sandusky, from apparent sexual overtures to an eye-witnessed attack in the team’s locker room showers.

Scolforo reported from Harrisburg. Maryclaire Dale in Philadelphia contributed to this report.