A jury on Monday awarded one of the largest verdicts in Lehigh County history when it ordered St. Luke’s University Hospital and one of its doctors to pay a former Lehigh Valley family $55 million in a medical malpractice case.

The actual payment is expected to be less because of a prior deal. 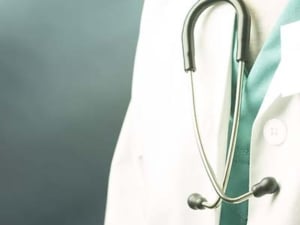 After a two-week civil trial before Judge J. Brian Johnson, the jury issued the verdict just before 2 p.m. in favor of Mark Crowell; his wife, Sharon Petrosky Crowell; and their 4-year-old son, Matthew Crowell.

The family’s attorneys, Slade McLaughlin and Paul Lauricella of Philadelphia, convinced the jury that St. Luke’s Hospital in Fountain Hill and Dr. Ronald Kriner ignored signs that Matthew Crowell was losing a significant amount of oxygen during delivery on Nov. 4, 2009, and was too large for Sharon Crowell, a petite woman, to deliver.

The attorneys argued that the baby, already losing oxygen, lost more when he got stuck during a vaginal delivery in which vacuum extraction was employed.

“He barely had a pulse” when he was born, Mark Crowell said after the verdict.

The family’s lawsuit says the baby was “pale and hypotonic with poor respiratory effort” after birth and displayed “seizure-like activity.” They say he also experienced brain bleeding. The family said Sharon Crowell was hemorrhaging blood and needed emergency surgery.

The family said the loss of oxygen resulted in myriad problems, and the boy — their only child — is severely developmentally delayed. He suffers from cerebral palsy, has trouble talking and walking, and still wears diapers, the family said.

“The fetal monitoring showed it should have been a C-section delivery,” McLaughlin said.

Lauricella added: “If they’d delivered him by C-section, he would have been fine.”

The family had resided in the Lehigh Valley but now lives in Mountain Top, Luzerne County. They said they moved there to be closer to family to get more help with the child. Mark Crowell is a doctor in the Scranton area, and Sharon Crowell is a sixth-grade teacher at Swiftwater Elementary Center in the Pocono Mountain School District.

The jury ruled that the hospital and Kriner are each 50 percent to blame, but the $55 million award isn’t the amount the family and attorneys will be getting.

The lawyers had reached a prior agreement guaranteeing a certain amount for the family, while capping how much the hospital would pay. Such “high-low” deals are common in civil cases to hedge jury verdicts.

The family’s lawyers would not tell a reporter how much the hospital had agreed to pay. St. Luke’s attorney Mark Zolfaghari wouldn’t comment on the agreement.

“It is always difficult to accept when the outcome of a patient’s care is not what is expected or desired. But it is especially hard when a child is involved. In the case of this baby, we know our staff provided appropriate care and did not cause harm to the baby.

“During this unfortunate trial, nationally renowned experts from Johns Hopkins, Harvard and Children’s Hospital of Philadelphia agreed with St. Luke’s. Despite the testimony of these experts, the jury had a different opinion. Unlike medicine, the legal system is not a precise science. In any event, our hearts and sincere wishes go out to the baby and his parents and family in this holiday season and in the years to come.”

He might be right. There’s only one known verdict that was larger. In 2010, eight families were awarded a total of $95 million in damages in a wrongful death action in Lehigh County against serial killer Charles Cullen, who is serving multiple life terms in New Jersey and has no assets. Cullen likely won’t pay any of it.

In 2011, a Lehigh County jury awarded $23 million to Sharlee Ann Smoyer of Lehighton, who lost her legs to infection while being cared for by a St. Luke’s University Health Network nurse.

In 1998, a jury’s verdict granted Bonnie Welteroth of Macungie and her husband $33.1 million in a medical malpractice suit over a delayed breast cancer diagnosis. In March 2002, a jury awarded $24 million to a 7-year-old Allentown boy who suffered brain damage at birth.