Sandusky Waives Right to Prelim Hearing; Will Not Face Accusers

Previous Next
Sandusky Waives Right to Prelim Hearing; Will Not Face Accusers

Jerry Sandusky waived his right to a preliminary hearing Tuesday and will not face the young men who accused him of sexual abuse in court today.  Instead, the case will go straight to trial at a later date.

Sandusky had been scheduled to face eight of his accusers as prosecutors carried out the task of proving they have enough evidence to advance to a trial.

BELLEFONTE, Pa. (AP) – The stunning allegations that a beloved icon of Penn State’s football team has secretly been a serial molester who used his charity for children to find and groom new victims will undergo their first legal test Tuesday inside a picturesque rural Pennsylvania courthouse. There, prosecutors will try to prove they have enough evidence to advance the case to county court for trial. 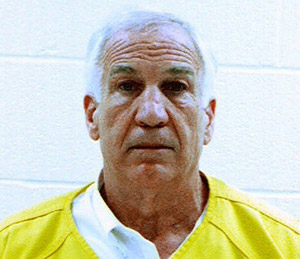 Young men who have said Jerry Sandusky sexually abused them when they were boys are expected to testify in his preliminary hearing on more than 50 criminal counts, a proceeding certain to add new facts to the case outlined against him in a pair of grand jury reports.

The hearing was expected to last a day or more, and will end with the district judge – a veteran jurist brought in from across the state – deciding whether the charges meet the relatively low standard under Pennsylvania law to advance the case to trial. Sandusky has denied the allegations against him.

Witnesses have contended before the grand jury that Sandusky committed a range of sexual offenses against boys as young as 10, assaulting them in hotel swimming pools, the basement of his home in State College and in the locker room showers at Penn State, where the 67-year-old former assistant football coach once built a national reputation as a defensive mastermind.

Sandusky has the Right to Waive his Preliminary Hearing

Sandusky has the right to waive his preliminary hearing, and defendants often do, but his lawyer Joseph Amendola has said he wants to lock witnesses into testimony and learn more details about the government’s case against his client.

Amendola said Monday Sandusky was “looking forward to the opportunity to face his accusers” and would not rule out the very remote possibility that Sandusky might take the stand. He said there have been no talks with prosecutors about a potential plea deal.

The courtroom drama will unfold in Bellefonte, the population 6,000 Centre County seat that boasts a stock of Victorian homes and nearby streams popular with fly fishermen. Lawyers, probation officers and clerks went about their business on Monday while an official numbered spots on the sidewalk outside court for network news vans. Barricades were piled neatly on the courthouse lawn, while lighting equipment was stored behind the veterans’ memorial nearby.

Streets were closed off Monday night in preparation for the hearing, which Sheriff Denny Nau said amounted to the biggest spectacle of his two decades in office.

Jim Koval, an official with the Administrative Office of Pennsylvania Courts who helped prepare for the event, said 100 reporters would be in the main courtroom, another 100 or so in a satellite courtroom watching a closed-circuit feed. He said the planning began after the Florida elections case that resulted in the election of George W. Bush as president over Al Gore in 2000.

“We had this plan in the can, so to speak, and when the Sandusky case emerged, we dusted that off, took a look at it and tailored it to what we’re confronted with,” Koval said.

The attorney general’s office said it expected to have four lawyers in the courtroom for the proceeding. In addition to any accusers who might testify, preliminary hearings also normally include testimony by lead investigators. Amendola will have the right to cross-examine.

A lawyer for one of the teenagers scheduled to testify bristled at Sandusky’s description of the encounters as child’s play, or “horsing around.”

“My client said, `There’s nothing fun about what happened with me,”‘ Slade McLaughlin said last week, adding that he believes the Penn State scandal has unleashed “a watershed moment” in the understanding of child sexual abuse.

Last month Sandusky told NBC’s Bob Costas and The New York Times that his relationship to the boys who said he abused them was like that of an extended family. Sandusky characterized his experiences with the children as “precious times” and said the physical aspect of the relationships “just happened that way” and didn’t involve abuse.

Sandusky retired from Penn State in 1999, a year after the first known abuse allegation reached police when a mother told investigators Sandusky had showered with her son during a visit to the Penn State football facilities. Accusations surfaced again in 2002, when graduate assistant Michael McQueary reported another alleged incident of abuse to football coach Joe Paterno and other university officials.

The grand jury probe began only in 2009, after a teen complained that Sandusky, then a volunteer coach at his high school, had abused him.

Sandusky first groomed him with gifts and trips in 2006 and 2007, then sexually assaulted him more than 20 times in 2008 through early 2009, the teen told the grand jury.

Sandusky founded The Second Mile, an organization to help struggling children, in 1977, and built it into a major charitable organization, headquartered in State College with offices in other parts of Pennsylvania.

Curley has been placed on leave and Schultz has returned to retirement in the wake of their arrests. The scandal brought down university president Graham Spanier and longtime coach Paterno, who was fired last month.

(Copyright 2011 by WMAL.com and The Associated Press.  All Rights Reserved.)