A Philadelphia jury has awarded nearly $10 million to the family of a woman killed during a scuffle with members of a motorcycle club outside of a Reading, Pennsylvania area restaurant.

According to court records, a jury last week awarded $9.7 million to the estate of Tonya Focht, who had been fatally struck by an SUV during a melee that occurred in June 2015. The fight involved several members of the Iron Order Motorcycle Club. 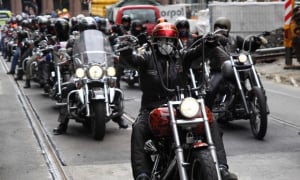 McLaughlin & Lauricella attorney Slade McLaughlin, who is representing Focht, said the case was unique because it had to be tried in the Criminal Justice Center, rather than City Hall, for security reasons. He also said he plans to continue to pursue liability against the motorcycle club.

“The client will not have achieved full justice until the Iron Order Motorcycle Club (which is responsible for the actions of its members) is held accountable and liable for the death of Tonya Focht,” McLaughlin said in a statement. “We have filed post-trial motions this week… and we will see this case through all appeals to the very end. The client’s needless death deserves nothing less.”

Brian Grady of Elliot Greenleaf, who represented the Iron Order Motorcycle Club, said there was no evidence that the club had anything to do with the fight.

“The judge was right on the money with the law. We’re extremely comfortable with the rulings he made,” Grady said.

According to the pretrial memo of Brenda Bollinger, who is the administrator of Focht’s estate, on June 19, 2015, Focht and her fiancé arrived at Anna’s Bar-B-Q Pit near Reading to meet friends for dinner. The memo said several members of the Iron Order Motorcycle Club began to accost them verbally and physically. Although the two attempted to leave, the members followed them into the restaurant’s parking lot where the conflicted escalated, the memo said.

The memo said Focht’s fiancé was wrestled to the ground where the members of the club began to “pummel” him. Focht tried to help her fiancé, but one of the club involved in the fight on claims that they were negligent and reckless. The plaintiff also made wrongful death and survivorship claims.

The memo noted that, at the time of her death, Focht was a stay-at-home mother of two minor children, and was studying to be a mental health professional. The memo also said the plaintiff’s medical expert, Wayne Ross, planned to testify that Focht was conscious when the vehicle ran over her head, and that she remained alive for a few minutes afterward.

In its pretrial memo, the Iron Order Motorcycle Club contended that Focht’s fiance had instigated previous altercations with its members, and that Focht and her fiancé had instigated the fight that resulted in Focht’s death. The memo also said it has little control over its local chapters regarding who can become a member and how the chapters are run, or managed.

At the time the trail ended, Marin and Gottschalls were the only defendants on the verdict sheet. A default judgement had also been entered against martin.

The jury found them liable and awarded $3.7 in compensatory damages, as well as $2 million on wrongful death claim and $1.7 million on the survival claim. The jury also found Martin 50 percent liable, and each Gottschall 25 percent liable.

Stephen Scheuerle of Hohn & Scheuerle, who represented Anna’s Bar-B-Q Pit, and Daniel Rucket of Rawle & Henderson, who represented the Gottchalls, each did not return a call for comment. Martin did not have an attorney during trial and The Legal was unable to find contact information for him.

If you or someone you love has been injured, the experienced Pennsylvania & New Jersey lawyers at McLaughlin & Lauricella, P.C., can help. Our attorneys consist of some of the best legal counsel in Pennsylvania and New Jersey, and we will fight aggressively for you throughout the legal process.

McLaughlin & Lauricella, P.C., have more than 90 years of experience representing accident victims and their families across Philadelphia, Berks, Bucks, Dauphin, Delaware, Lackawanna, Lehigh, Luzerne, Montgomery, and Northampton Counties. We also serve injured accident victims throughout the State of New Jersey. Contact us today toll-free at 1-855-633-6251 or fill out our confidential contact form to learn more about your legal options.