A Philadelphia jury has awarded more than $20 million in a case where a man’s leg was amputated above the knee after a 10-year-old boy ran him over with a five-ton track loader. 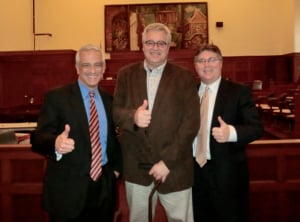 The jury awarded $18 million to Ruick Rolland and $2 million in loss of consortium to his wife, Holly Rolland. They also came back with a $16,000 punitive damages award against the father of the boy. The plaintiffs alleged in the lawsuit that the father “proudly” allowed his son to operate the piece of machinery without meaningful training or supervision. Others on the hook included the property owner of where the accident took place and the rental company that was alleged to have known there was a child operating its machinery.

After a near-three-week trial before Philadelphia Court of Common Pleas Judge John Milton Younge, the jury deliberated for two-and-a-half hours Thursday before returning a unanimous verdict in favor of the plaintiffs, attorneys said.

Reached for comment following the verdict, the plaintiffs’ attorneys, Paul A. Lauricella and Slade McLaughlin, said it was stressful trying the case with $6 million on the table from the defendants, but the attorneys said they remained confident throughout the trial that they could rebut the defense theory that Ruick Rolland was contributorily negligent for his injuries.

Lauricella said the jury was “underwhelmed” by the theory.

The Rollands sued Stephen Senn, the boy’s father, and Senn Landscaping; the property owner and his construction company; and the company that rented the track loader in question. The plaintiffs put on evidence that agents of the rental company knew there was a 10-year-old operating the five-ton track loader and didn’t do anything about it.

According to court papers and Lauricella’s opening statement of the case, the underlying accident took place in 2009 at Bruce Irrgang’s Wayne, Pa., property, during a construction project in which Irrgang was trying to recreate a bridge located at Augusta National Golf Club in Augusta, Ga.

At the time, according to the lawsuit, Ruick Rolland had been doing restoration and woodworking for Irrgang, who owned United Construction Services Co.

Irrgang hired Senn and his company, Senn Landscaping, to dig up a pond as part of the bridge construction project. The project called for a track excavator and a five-ton track loader, the latter of which Senn allowed his 10-year-old son to operate without permission or supervision, the lawsuit alleged.

On August 14, 2009, Rolland was moving a hose out of the way of the track loader when the boy moved the machine to the left and pinned Rolland underneath. The Legal is withholding the name of the child.

The lawsuit further alleged that a representative of Modern Equipment Sales and Rental Co., the company that rented the vehicle, saw the child operating the track loader after dropping it off.

According to the plaintiffs’ court papers, Kevin Cann, a representative from Modern Equipment, saw the child operating the loader “within minutes of its delivery” to the property. Cann reported what he saw to Modern Equipment’s rental manager, Paul Mutter, who, according to the motion, said “such use was not his responsibility.”

A picture the plaintiffs provided in court filings shows a caged-in driver’s seat and forklift jutting out of the vehicle’s front end. It runs on tracked treads.

The lawsuit had a somewhat unique procedural posturing by the time it reached the jury. Senn had already stipulated to his negligence in the accident. He pleaded the Fifth Amendment when called by the plaintiffs, his attorney confirmed.

As for Modern Equipment, a Philadelphia judge had already entered summary judgment as to negligent entrustment against the company, leaving only the issue of damages to be decided for those two defendants.

Because it was disputed that Irrgang knew about the 10-year-old’s operation of the track loader, that issue was advanced toward trial.

Rolland, himself, was found zero percent contributorily negligent, which the plaintiffs’ attorneys said reflected their biggest victory in the case.

“The judge made very deliberate efforts to try to get the case settled and the defense never even got to the judge’s number, and they sure as heck didn’t get to our number,” McLaughlin said.

Reached for comment, Senn’s attorney, Jane A. North of Deasey, Mahoney, Valentini & North, said it was important for her client to minimize the punitive damages award, at which she said the defense was successful. The $16,000 in punitive damages against Senn reflects 50 percent of his net worth, she confirmed.

Both of the other defendants were dismissed from claims for punitive damages.

“This was a horrible accident, a horrible injury,” North said. “The verdict was higher than we had anticipated but it’s hard to value an injury like that.”

Snyder said he was “very disappointed in the jurors’ decision” but added the defense was “tremendously handcuffed” by the pretrial grant of summary judgment against it.

Snyder said there were “factual issues that militate against the order of summary judgment” that would be grounds for an appeal.