Recently, a truck driver fell asleep at the wheel on Interstate 95, just south of Philadelphia, causing a multi-vehicle accident. 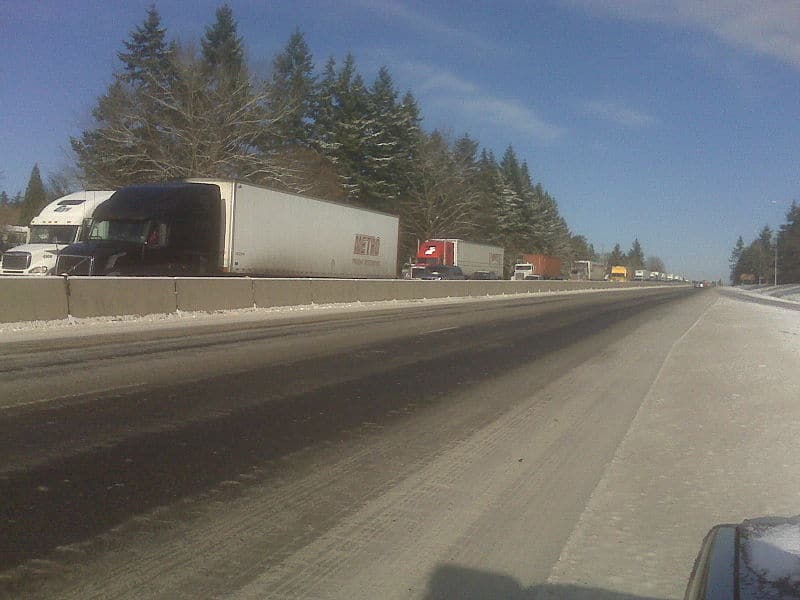 All northbound lanes were shut down for more than five hours, and three people suffered significant injuries. The truck’s gas tank leaked diesel fuel onto the interstate following the accident, which delayed the reopening of the road. According to officials, the driver will face charges. While there are many reasons truck accidents occur, perhaps one of the most significant of those is truck driver fatigue. Recent data shows that truck driver fatigue is a factor in as many as 35-40 percent of all truck accidents.

In 2011, a new Department of Transportation rule lowered the maximum hours a trucker could drive at a stretch from twelve hours to eleven – a number many believe is still too high. The new rules require drivers to take a thirty-minute rest break within the first eight hours of their shift, and a 34-hour “restart” period every seven days. The effect of these new rules, aside from lowering the number of hours a driver can drive continuously, was to reduce the maximum work hours in a week from 82 hours to 70 hours.

Truck Drivers and Trucking Companies Have Little Motivation to Rest

Most people who have driven eleven hours in one stretch are fully aware of just how tired they were during the last two or three hours. Despite this, the trucking industry has fought against the stricter guidelines. You might wonder why the industry would want fatigued truckers on the roadways. From the truck driver’s perspective, he or she is only paid for the time actually spent behind the wheel, leading to many drivers keeping two sets of log books, in order to drive longer hours. The trucking companies have little motivation to encourage their drivers to stop and rest, since the faster the loads are delivered, the more money the company makes.

What is Truck Driver Fatigue?

Fatigue is exhaustion, extreme tiredness and lack of sleep, or a combination of all of the above. Driver fatigue can be so pervasive that drivers cannot accurately gauge their level of fatigue. Sleep loss can be acute or cumulative. Acute sleep loss is the loss of sleep within a 24-hour period, while cumulative sleep loss occurs over several days. Contrary to popular belief, cumulative sleep loss cannot be “made up for” by sleeping in on one morning. One study found that even two hours of sleep loss can result in performance impairment and lowered levels of alertness.

Consider that a truck driver driving at 65 mph who nods off for three seconds is “driving” a truck the length of a football field all the while being essentially unconscious. During those three seconds, the truck driver could have his eyes open, yet in this “microsleep” state, fail to respond to outside information. This means the driver could fail to see a road sign, a signal light, a curve in the road–or another driver. Microsleeps occur most often in the pre-dawn and mid-afternoon hours, and increase with cumulative sleep deprivation.

A fatigued truck driver can fall asleep at the wheel of a truck, leaving an 80,000 pound machine barreling down the road at 70 mph, unattended. Fatigue can lead to driver hallucinations, significantly reducing mental capabilities. A severely fatigued truck driver may be unable to react quickly to a sudden situation on the road, leading to a serious or fatal accident. In some cases, even when the driver is aware of his or her level of fatigue, the trucking company may order continued driving in order to get the load delivered. The alternative could be that the driver would lose his job. Therefore, they may decide to keep driving despite the fatigue.

For as far back as truck drivers have been delivering cargo, they have been falling asleep at the wheel. The issue was not taken very seriously, however, until 1995 during the first National Truck and Bus Safety Summit, held in Kansas City, Missouri. Researchers, safety advocates, and government representatives developed a list of the most serious issues facing the trucking industry. A list of 17 safety issues was compiled, with fatigued truck drivers taking the number one position on the list.

As time passed, our nation has become a 24-hour society, and fatigue has become an all-encompassing problem. A recent National Sleep Foundation report found that more than 37 percent of American adults are so sleepy and tired during the day that it interferes with their work and activities. The issue is worse for truck drivers, who are under pressure to get their loads delivered faster and faster.

Making Sure Your Rights are Protected after a Trucking Accident

If you or a loved one has suffered an injury as a result of a fatigued truck driver, it is important you seek experienced legal counsel. Truck accidents are different from automobile accidents, not only because of the more serious injuries, but because there can be multiple defendants, making the case much more complex. Speaking to a knowledgeable truck injury attorney at McLaughlin & Lauricella, P.C., can ensure that your rights are protected.

The trucking accident attorneys at McLaughlin & Lauricella, P.C., have more than 68 years of experience representing injured accident victims and their families across Philadelphia, Berks, Bucks, Dauphin, Delaware, Lackawanna, Lehigh, Luzerne, Montgomery, and Northampton counties. We are also proud to serve injured accident victims throughout the State of New Jersey. Contact us today at 215-568-1510 or fill out our confidential contact form to learn more about your legal options.