Graham Spanier, 68, was recently sentenced for covering up a 2001 complaint filed by a graduate student who allegedly witnessed Jerry Sandusky having sex with a boy in the campus football showers. Spanier was President of Penn State during the Sandusky scandal. Along with two other former Penn State administrators, Spanier was found guilty of child endangerment (a misdemeanor offense in Pennsylvania), although the other two pled guilty, and Spanier made the decision to go to trial. Spanier was sentenced to 4-12 months in jail, two years of probation, and was assessed a $7,500 fine. The guilty verdict was a particularly low point to an otherwise distinguished career, as Spanier served as President of Pennsylvania State University from 1995-2011.

Consequences for Failure to Protect Children in Pennsylvania

Nearly five years ago, Jerry Sandusky was convicted for the molestation of ten boys over a fifteen-year period, and sentenced to 30-60 years in prison. Sandusky continues to appeal his sentence. Pennsylvania Attorney General Josh Shapiro had this to say about the sentences for the three former Penn State officials: “Today’s sentencings, which landed all three defendants behind bars, leaves no doubt that there are consequences for failing to protect children in Pennsylvania.” Prosecutors in Spanier’s case claim he showed a “stunning lack of remorse for his victims,” going on to say Spanier chose to protect his own reputation, as well as that of Pennsylvania State University, rather than protecting the children.

Was a Prison Sentence Over the Top for Spanier?

Spanier’s attorney said he had already suffered enough, as he lost his job and suffered public shaming and harm to his reputation. Members of the clergy, professors, deans, and college presidents submitted a significant number of letters, claiming Spanier had devoted the majority of his career to overseeing the welfare of families, children, and youth. Spanier was paid a higher salary while serving as President of Penn State than most all other University Presidents in the nation. 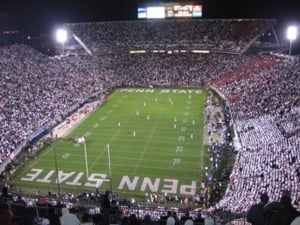 Was Joe Paterno Aware of Suspicions Regarding Sandusky?

During the time when Sandusky was being accused and investigated, Spanier appeared not to recognize the seriousness of the allegations, telling others that campus life at Penn State would not be in chaos for long. Spanier was wrong about that, and was fired from his position just days after Sandusky’s arrest, along with Joe Paterno, the legendary football coach. Although Paterno’s family has continued to deny that Coach Paterno played any role in the cover-up, independent investigators concluded it was likely that Paterno was at least aware of suspicions regarding Sandusky as early as 1998. Paterno died in 2012.

Spanier, Curley, and Schultz “Heavily Involved” in at Least Two of the Cases

Two of the Sandusky cases—and possibly more—heavily involved Spanier, Curley, and Schultz. In fact, the three administrators discussed the 1998 and 2001 cases among themselves via e-mail early in 2001. The mother of one of the victims contacted law enforcement to file a report, claiming inappropriate touching of her son by Sandusky in a shower room. At that time, the District Attorney made the decision not to prosecute Sandusky. However, among Schultz’s notes were: “Other children?” and “Is this the opening of Pandora’s box?”

In the 2001 case, Mike McQueary, Assistant Football Coach, testified under oath that he witnessed the molestation of a young boy, late at night, by Sandusky. McQueary claimed Sandusky and the boy were in a locker room shower when McQueary walked in. Emails between Spanier, Curley, and Schultz discussed strategies to persuade Sandusky to get help for his “problem.” According to Spanier’s attorney, the former Penn State President will appeal his conviction. Following Sandusky’s conviction, Pennsylvania State University has paid more than $90 million to settle civil claims filed by Sandusky accusers.

If someone you love has been the victim of child sexual assault, the experienced child sexual assault lawyers at McLaughlin & Lauricella, P.C., can help. Our team of lawyers consists of some of the best attorneys in Pennsylvania and New Jersey, and we will fight aggressively for you throughout the legal process.

At McLaughlin & Lauricella, P.C., our attorneys have more than 90 years of experience representing sexual assault victims and their families across Philadelphia, Berks, Bucks, Dauphin, Delaware, Lackawanna, Lehigh, Luzerne, Montgomery, and Northampton Counties. We are also proud to serve victims throughout the State of New Jersey. Contact us today toll-free at 1-855-633-6251 or fill out our confidential contact form to learn more about your legal options.