Within the past few months, a garbage truck struck and killed 24-year-old Emily Fredricks as she biked to work one early Tuesday morning. This horrific, fatal bicycle accident occurred on Philadelphia’s Spruce Street, which has a dedicated bicycle lane on the right hand side of the road. However, there are no barricades separating this lane from motor vehicle traffic, and the paint designating the pathway as a bike lane has faded. Sadly, Fredricks’ death is one of many bicycle fatalities in the past year and has put a spotlight on bicycling safety in the city.

Bicycling advocates have been fighting for years to get better safety infrastructure in Philadelphia. The city has responded with a “Vision Zero Plan” to create better bike lanes that will help prevent tragedies such as this. Some of the planned modifications may even include raised bike lanes that separate cyclists from cars and trucks. Currently, however, many of the bike lanes – like the one along Spruce Street where Fredricks was killed – are occupied with cars that are loading and unloading. This forces cyclists back onto streets where the dangers of being struck and killed are greater.

After the latest fatal crash, the Bicycle Coalition of Philadelphia organized a vigil in memory of Fredricks and every other cyclist killed in the city. Fellow cyclists, pedestrians, and motorists even created a human safety barrier by standing along two blocks of the Spruce Street bike lane where she was killed.

In 2014, there were 551 bicycle crashes in Philadelphia alone. This number has been lowered dramatically in recent years due to improvements made by the city. In fact, in 1998, there were 1,058 bike crashes in Philadelphia. Cutting the number of bicycling accidents in half was largely due to bike lanes being added and safety campaigns being launched in and around the city. But still more can be done. 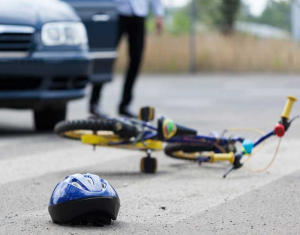 Between 2000 and 2012, there was a 64% increase in cyclists who travel to and from work each day. This had led to more bicycling accidents and prompted cities across the country to address bicycling safety. In 2014, 726 cyclists were killed in motor vehicle crashes. This accounted for 2% of all traffic deaths and crash-related injuries.

If you are bicyclist in Philadelphia, it is important to know what you can do to protect yourself from serious and fatal accidents. Safety begins with wearing a well-fitting helmet to protect your head from traumatic brain injuries. You can see a list of helmets grouped by manufacturer by visiting the Bicycle Helmet Safety Institute’s website before choosing the one that is best for you.

You can also help to improve your chances of arriving at your final destination by riding a bike that fits you and has been properly serviced. Make sure your bike’s tires are properly inflated and that you have working brakes. In addition, wear bright and reflective clothing at all times to increase your visibility.

The bicycling accident attorneys at McLaughlin & Lauricella, P.C., have more than 100 years of experience, including representing injured accident victims and their families across Philadelphia, Berks, Bucks, Dauphin, Delaware, Lackawanna, Lehigh, Luzerne, Montgomery, and Northampton Counties. We are also proud to serve injured accident victims throughout the State of New Jersey. Contact us today toll-free at 1-855-633-6251 or fill out our confidential contact form to learn more about your legal options.