The cover-up investigators detailed in their report Thursday of Penn State’s handling of the Jerry Sandusky child sex-abuse scandal rang familiar to anyone following the Catholic Church’s pedophile priest cases.

A sexual predator was protected to save an institution’s reputation. Both the Penn State investigation, led by former FBI Director Louis Freeh, and the two grand juries examining allegations against priests in the Philadelphia Archdiocese came to that same conclusion. 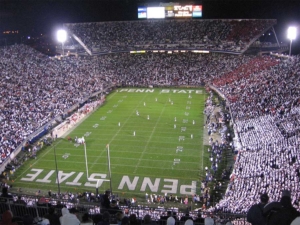 The phenomenon at work in both the church’s global response to pedophile priests and Penn State’s response to a single molester in the ranks of its athletic staff has been a factor in the downfall of institutions and governments throughout history, said the Rev. Thomas Doyle, a canon lawyer who has testified in clergy abuse trials in North America and Europe.

“Institutions at a certain point in their existence become greater than the sum total of the people who make them up,” Doyle said. “The institution … becomes more sacred than the people it’s supposed to serve.”

At Penn State, the institution was largely defined by football, Doyle said.

Responsible for Penn State’s prestige and position on the national stage, the football program and its leader for more than 40 years, Joe Paterno, are often credited with building the university from a small agricultural college to an internationally respected research institution by drawing in millions in donations.

It’s a huge, huge moneymaker and everyone who is a part of that system benefits from it. No one wants to see that moneymaking machine slow down or stop,” said attorney Slade McLaughlin, who represents victims of sexual abuse by Sandusky and clergy in the Philadelphia Archdiocese.

Vicky Triponey, a former vice president for student affairs at Penn State, experienced what it meant to buck the machine firsthand. She resigned her post in 2007 after a series of clashes with Paterno over discipline for football players who violated the law or the student code of conduct.

“The coach would get upset when discipline interfered with the ability of students to play football,” Triponey said in an interview Friday.

The failure of leadership in handling the Sandusky affair was a direct result of an aversion to any action that might tarnish the football program, said Triponey, interim vice president of student affairs at The College of New Jersey.

As a disciplinarian, Triponey said she felt she was able to keep her sights on that goal. But others, like Penn State President Graham Spanier, Vice President of Finance and Business Gary Schultz and Athletic Director Tim Curley were not.

“Somewhere along the way, they lost sight of what this was all about,” she said.

Spanier resigned Nov. 9, the day Paterno was fired. Schultz and Curley have been charged with lying to the grand jury that recommended the charges against Sandusky, and with failing to report the allegations.

Church officials, such as Monsignor William Lynn, who was convicted on June 22 — the same day as Sandusky — of endangering children by shifting abusive priests around Philadelphia parishes, opted not to report pedophile priests. And Spanier, Curley and Schultz, according to the Freeh Report, made the same inexplicable decision in not reporting Sandusky, who was convicted on 45 counts of sex abuse against 10 victims over a period of 15 years.

Those actions were conducted by men who ignored the pain of victims and believed their institutions were above reproach, said David Clohessy, the national director of SNAP, the Survivors Network of those Abused by Priests.

“I think abuse and cover-up thrives in cultures where there is a sense of complacency and superiority, oftentimes sadly fostered by those in charge,” he said. “I think that organizations have to be very careful to instill pride but not arrogance.”

Just as church officials did, Penn State administrators at times went out of their way to conceal the allegations against Sandusky, the Freeh Report noted. Months after an assistant coach recounted seeing Sandusky molesting a boy in a locker room shower, Schultz met with the board of trustees about a property transaction involving The Second Mile, the charity for disadvantaged children that Sandusky founded.

He not only failed to mention the accusation to the board or officials at the charity, but, “Schultz approved a press release, issued Sept. 21, 2001, announcing the land sale in which he praised Sandusky for his work with Second Mile,” the Freeh Report pointed out.