A damning report charged the college with ‘total disregard’ for the safety of Sandusky’s victims.

Diane Dimond (Daily Beast) on the legal implications – and whether the football program will take a hit.

The long-awaited Freeh Report, an investigation into Penn State’s handling of child abuse committed by its former employee Jerry Sandusky – funded by the university itself – dropped like an anvil today, blaming the college and its most senior leaders for “total and consistent disregard… for the safety and welfare of Sandusky’s child victims.”

Former FBI director Louis Freeh found that the university and its most senior leaders “failed to protect against a child sexual predator harming children for over a decade.” 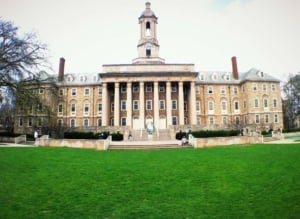 What will Penn State’s response be to the scathingly critical report?  What steps might the institution take to try to regain its reputation – and how many legal hurdles (read: civil lawsuits) will the university have to face?

The Daily Beast has learned that since Penn State first promised to begin compensation talks with Sandusky’s victims, on the night of the former coach’s conviction three weeks ago, the university has taken no steps toward that goal.  And several other official bodies that promised independent investigations following Sandusky’s arrest in November 2011 have also failed to decide on any course of action or possible sanctions against the Big Ten School.

Besides the Freeh investigation, which spanned more than six months and included formal interviews with 430 people, the FBI was also reported to be investigating, but does not confirm ongoing inquiries.  The National Collegiate Athletic Association announced last week it was looking into whether Penn State had violated any NCAA rules on honesty and ethical conduct, but would only say it is “actively collecting information from the Penn State Special Committee Investigative Counsel … to determine our next steps.”  The Department of Education jumped into the mix as well, saying it would decide if there had been any violation of the Clery Act, which calls for mandatory reporting of crimes on campus and issuance of timely warnings to the campus community. The department told The Daily Beast that no determination had been reached yet and “our investigations take time.”

Freeh, speaking after release of his team’s 200-pagereport, was more decisive.  “Penn State failed to implement the provisions of the Clery Act, a 1990 federal law that requires the collecting and reporting of the crimes such as Sandusky committed on campus in 2001.” Freeh added that on the day of Sandusky’s arrest, “Penn State’s Clery Act implementation plan was still in draft form,” despite the fact that then-President Graham Spanier had held his post since 1995. (Punishment for violation of the act, named for Jeanne Clery, a Lehigh University freshman who was raped and murdered in her campus residence in 1986, is $27,500 per violation and the possible suspension from participating in federal student-aid programs.)

However, following a Pennsylvania jury’s overwhelming finding that Sandusky was guilty of 45 of 48 sex crimes, the most confounding non-development is why Penn State has taken no steps to make good on its verdict-night pledge to set up a response system “The purpose of the program is simple – the university wants to provide a forum where the university can privately, expeditiously and fairly address the victims’ concerns and compensate them for claims relating to the university.” Penn State’s public-relations team took pains to make sure that promissory statement was included in the media’s late night verdict reports on June 22.

“I haven’t gotten a call or e-mail or a letter from anyone at Penn State,” attorney Slade McLaughlin tells The Daily Beast. McLaughlin represents the 18-year-old prosecutors dubbed Victim  No. 1, the young man whose graphic and detailed revelations about his years with Jerry Sandusky sparked the investigation and criminal trial. His client’s tearful testimony was one of the most heart-rending of the trial.

“I have no idea what they plan,” McLaughlin said, adding that he took the Penn State verdict-night announcement as an olive branch. But with no concrete followup, he concludes, “If they have a strategy they are keeping it to themselves.”

“I’m not hard to locate,” Tom Kline, the attorney for victim No. 5said. “They put out a statement saying we are reaching out to everyone involved… Nobody called me and said. ‘Now we have a plan in place, are you interested in talking?'”

Kline has maintained – and now the Freeh report appears to back him up – that the molestation of his client could have been avoided if only top Penn State officials had acted after hearing an explosive accusation from assistant coach Michael McQueary in February of 2001. Spanier, former vice president Gary Schultz, and now-suspended athletic director Tom Curley failed to call police after learning that Sandusky had been spotted in a campus shower engaging in what appeared to be the rape of an unidentified young boy, according to the Freeh report.  As the report stressed, the trio, along with head football coach Joe Paterno, had known since 1998 about Sandusky’s questionable activities with boys – yet did nothing when confronted with McQueary’s report. Six months later, Klein says, his young client fell prey to Sandusky.

As laid out in the Freeh Report, the timing of who knew what and when they knew it will certainly play a major role in any upcoming litigation.

Exactly how many proven or alleged victims might come forward to try to dip into Penn State’s $1.8 billion endowment is not known.  A total of 10 known Sandusky victims were mentioned during trial, though two were never identified by name. Some of them may ultimately decide to enter into private negotiations with whatever entity Penn State creates to tackle the compensation problem. Others may decide to file civil suits. In addition, papers filed with the court make it clear prosecutors also had “victims Nos. 11 through19” standing by in case of acquittal or a possible federal case.  One of that group is 30-year-old Travis Weaver, who alleges his molestation began in 1992 when he was just 10 years old and occurred “more than 100 times.” Weaver, who testified before the grand jury, has already filed a civil suit against Sandusky, his Second Mile charity, and Penn State, but legal experts say he may have trouble winning because Pennsylvania’s statute of limitations generally regards anyone over 30 as being “statute barred” from filing a civil suit.

McLaughlin says his law office has already gotten calls from other potential clients seeking representation. “I predict there will be a bunch more Sandusky victims,” he said, emphasizing that the former football coach started the Second Mile charity back in 1977. “And I think Spanier will be indicted … you may see a lot more indictments,” McLaughlin predicts.

Defense attorney Mickey Sherman of Greenwich, Connecticut, watched the Sandusky trial closely and says he would have already filed a civil suit. “I’d be suing, getting it totally on the record. They’d do a lot better with a jury than they will with some liaison committee at the university,” Sherman said.  How much would he ask in damages? “Two Brink’s trucks full of money,” he said. “Maybe … maybe that would be enough. A crime like this is almost worse than murder.  It’s a life sentence for these kids.”

The Freeh Report’s complete condemnation of Penn State’s reaction to the Sandusky scandal – from the president, vice president, general counsel, the Board of Trustees, and all the way down to janitors who failed to report to police a 2002 shower incident with Sandusky and a boy – has now placed the university’s most lucrative and proud asset into a position of being its most vulnerable commodity.

Fallout from the Freeh Report could ultimately cause the NCAA to suspend or temporarily cancel Penn State’s football team as punishment.  The university would stand to lose a considerable chunk (if not all) of the $50 million dollars [more details] in profit generated each year by the Nittany Lions. Donations to the university, pegged at more than $208 million in fiscal year 2011-2012, could also decline, especially money from proud alumni dismayed over the Penn State administration’s handling of the Sandusky affair.  And, of course, the money brought in by Joe Paterno, a major fundraiser for the school, is already lost.  Recruitment of new students and faculty will also likely be difficult in the years ahead.

Many child abuse survivor groups and those who represent them are calling for regulators to hit Penn State hard – where it would hurt the most – and discontinue the football program for the next several years.

“The Department of Education, the NCAA, the Department of Justice, should and needs to make an example of Penn State,” attorney Tom Kline said. “They all need to set an example, to put all other universities on notice that there are repercussions to this kind of behavior. Penn State must be made an example.”

The Penn State Board of Trustees is reported to now be firmly engaged the task of damage control. It’s likely things in Happy Valley won’t be so happy for years to come.