Firework Accidents & Injuries | The 4th of July and Summer

Previous Next
Firework Accidents & Injuries | The 4th of July and Summer

When people think of the 4th of July and summer time, the first things that come to mind are barbeques, sitting by the pool, the beach, parties, and the spectacle of colorful fireworks.

However, some people do not leave it to the professionals to put on these explosive displays at night but instead put on their own shows at home. Although firework professionals do put on terrific displays, that does not mean they are not capable of causing serious harm to others.

According to the 2018 Consumer Product Safety Commission Annual Fireworks Report five people died from direct impacts from fireworks last year. These deaths occurred at home and in the presence of others while the victims were lighting-off fireworks. 9,100 injuries were treated in United States Hospital Emergency Departments, a rate of 2.8 per 100,000 people for firework injuries. In the period of a month, between June 22-July 22, 2018, there were 5,600 firework-related injuries, accounting for 62% of the total firework injuries for the entirety of 2018. These statistics highlight the dangerousness of fireworks during the holiday season. 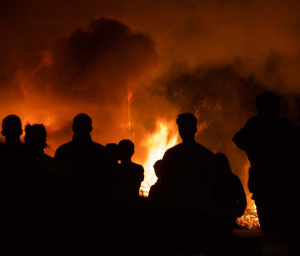 Firework accidents and injuries can be the result of malfunctions, the display tipping over and firing at onlookers, user error, and misuse of fireworks. In some instances, users had consumed alcohol and attempted to carelessly light fireworks. NEVER ATTEMPT TO LIGHT FIREWORKS WHILE INTOXICATED. Numerous firework injury victims have suffered lifelong injuries such as removal of an eye, amputation of fingers, reduced mobility of the hand, and nerve damage.

Current Law in PA and NJ Regarding Consumer Purchases of Fireworks

In Pennsylvania, House Bill 542 was passed in October 2017 and allowed consumers in PA to buy more than simple/low grade fireworks such as sparklers and fountain displays. House Bill 542 allows for a greater variety of fireworks to be purchased, which were previously banned under the old law. House Bill 542 has given consumers more purchasing power by allowing them to buy firecrackers, roman candles, bottle rockets, and similar fireworks that are more powerful and, thus, more dangerous. Anyone 18 years or older may make these purchases. However, a permit is still needed to put on larger fireworks displays in the Pennsylvania. Possessing and setting-off illegal fireworks or setting off fireworks without the proper permit can result in civil and criminal penalties.

New Jersey has taken a slightly different approach regarding consumer fireworks. In 2017, the New Jersey Explosive and Fireworks Act allowed consumers to purchase lower grade fireworks such as sparklers, ground-based fireworks, and novelty fireworks such as pop-its and smoke balls. All other fireworks including aerial fireworks are still illegal. Proponents of the Bill stated that NJ is one of the most densely populated states in the country and higher-grade fireworks pose a serious threat to public safety. Once again, setting off illegal fireworks and setting off fireworks without the proper permits can result in civil and criminal penalties.

Operators of firework displays and at-home users of fireworks can be found liable under theories of negligence, strict liability, defective products, and failure to warn (just to name a few). Negligent operators of a fireworks display can cause injuries to spectators and the surrounding property, all of which can be compensable. In states where strict liability is imposed, no matter what level of care is used, the operator will be held liable for the harm resulting from the dangerous and hazardous activity.

Even though some firework displays and shows can be dangerous, spectators should do their best not to increase their risk of being injured by a fireworks display. This means paying attention, standing a safe distance away from the fireworks, and generally not putting themselves in danger when viewing a professional fireworks display. With home fireworks, it is important to read any and all instructions, to never set-off fireworks inside, and to set-off any fireworks in a safe manner to prevent harm to oneself or harm to others who are in the vicinity.

Contact the Accident Attorneys Who Have The Experience You Need

Fireworks are fun and captivating, but they are also dangerous products that can cause serious bodily injuries or death. If you, or a loved one, are injured from the use of fireworks, contact a personal injury or product liability law attorney in our Philadelphia or New Jersey office. The accident attorneys at McLaughlin & Lauricella, P.C., have more than 100 years of experience representing the injured and wrongful death victims and their families across Philadelphia and eastern Pennsylvania Counties. We also serve accident victims throughout the State of New Jersey. Contact us today toll-free at 215-568-1510 or fill out our confidential contact form to learn more about your legal options.