Be Careful When You Go To Other Websites

Previous Next
Be Careful When You Go To Other Websites

Slade and I spent a combined 41 years of our careers at the Beasley Firm.  There, we worked alongside legendary trial attorney Jim Beasley until he passed away in 2004. We have great affection for Jim Beasley Sr. and regard him as a great mentor. 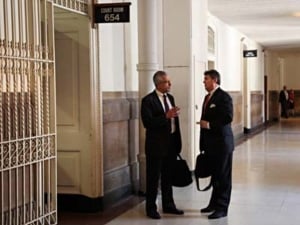 It turns out that the folks currently running the Beasley Firm maintain a website which touts the cases the firm has won.  That list of cases includes several high profile cases that Slade and I had won, including our $16,250,000 trial settlement in Skirpan v. Caterpillar, and Slade’s $20,500,000 medical malpractice verdict in Fledderman v. Glunk. Sadly, however, the Beasley Firm has methodically redacted our names from the news accounts posted on the website so that any person reading them would never know that the people who secured the advertised verdicts are no longer affiliated with the firm.  For instance, the Beasley Firm website touts Slade’s $20,500,000.00 medical malpractice verdict, but attributes it to an unnamed attorney.  Similarly, the website contains numerous news accounts with respect to Facenda v NFL, a landmark intellectual property case which I personally litigated.  Each of the news accounts posted on the Beasley Firm website has been redacted so that my name is not mentioned.

I wouldn’t even be mentioning this except for the fact that we are concerned that unsuspecting people might go to the Beasley Firm believing that they are securing the services of Paul Lauricella and Slade McLaughlin.  There should be no mistake:  if you want to retain Slade McLaughlin or Paul Lauricella, you will not find them at the Beasley Firm.

ADDENDUM:  Since I initially posted this blog, the Beasley Firm has made a few cosmetic changes to its website.  While my name remains inexplicably redacted from the stories about the landmark decision in Facenda v NFL, Slade’s name has been returned to the Fledderman story, but in a very diluted and misleading way so as to make it appear that his efforts were subordinate to those of Max Kennerly, a young associate who assisted Slade in the prosecution of that case. Max is an affable fellow and an incredibly smart and talented attorney, but I am certain that he would acknowledge that the account which appears on the Beasley firm’s website unfairly overstates his contribution to the outcome of that case.

Likewise, the Beasley Firm has returned my name and Slade’s to one of the accounts of the Skirpan case, but has falsely suggested that the firm’s financial contribution to the case was the deciding factor in its outcome.  I am certain that any of the attorneys familiar with the case will readily acknowledge that the result in that case was a function of our determined pretrial efforts (including the depositions of thirty witnesses), our astute legal arguments (including a 95 page brief which effectively circumvented the employer immunity usually afforded by the Worker’s Compensation Act), and by our effective advocacy during three weeks of trial in which Slade and I cross-examined various defense witnesses until our opponents belatedly realized the wisdom of settling the case. While we certainly appreciate the Firm’s financial investment in the case, the Beasley firm’s website unfairly overstates its contribution to the outcome while unreasonably and unnecessarily minimizing ours.  Quite honestly, a law firm should be more than a bank, shouldn’t it?

We have a great fondness for Jim Beasley Sr., and we will forever mourn his passing in 2004.  However, we want the record to be clear that we are no longer affiliated with the Beasley Firm.  We are exploring our legal options, including the possibility of a claim predicated upon the Lanham Act— the very law which was implicated in the Facenda case.  Who knows? I thought I was the only intellectual property attorney at the Beasley Firm, but perhaps I’ll be surprised when I read their Answer to our Complaint.  We will keep all of you posted!